It’s a well-worn cliche from the 1950s – “Run it up the flagpole and see if anyone salutes.” Today, you can have your own American flagpole to show your patriotism and give both guests and passersby a U.S. flag to salute, respect, and admire right on your own property.

Flagpoles have long been de rigueur for seaports and yacht clubs, but all homeowners now also enjoy the prestige and pleasures of their own mast. Therefore, if you want to fly Old Glory on your personal property, you absolutely can, with a few caveats and flag etiquette rules.

You definitely have to be aware, flag etiquette is taken seriously here in the United States. Woe betide anyone who violates flag laws—flouting flag rules reportedly cost one high-profile real estate tycoon $100,000 at one of his oceanfront estates.

As you select the best flagpole for your property, consider placement, and prepare to fly your own flag, you may need to brush up on American flag etiquette. Here is a good guide to help you get more familiar with the do’s and don’ts when it comes to flag display, as well as other helpful tips you will need to know.

Types of Flagpoles to Consider

Flagpoles are no longer clunky wooden poles or recycled aluminum sailboat masts. You have a lot of material choices to pick from, each with its own advantages.

Modern flagpoles are mostly electrically non-conductive and absorb sound— which means no more banging of snaps on a metal pole when the flag is flying in a breeze. Many poles are made of resilient and lightweight fiberglass, even though metal flagpoles are still available.

Flagpoles come in varying heights to fit your property. You will find a lot of owning restrictions and governing rules about how tall a flagpole can be, so be sure to know the laws in your neighborhood before settling on a certain height. The most standard height is about 20 feet in residential areas, but you may want a taller pole if you have a lot of greenery and trees or have a larger, multi-story home.

Generally, you will find flagpoles in three distinct styles. One of the most traditional flagpole styles, and the one seen at most yacht clubs, has a crosspiece called a yardarm as well as an angled gaff. A second version has just the yardarm, and the simplest (and least expensive) is a single, standalone flagpole.

If you want to fly only the American flag, all you need is a single pole. But if you want more flags fluttering in the ocean breeze, opt for a flagpole with a yardarm and perhaps a gaff. 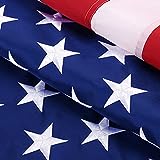 Basic Rules of Etiquette with the American Flag

The American flag should never be flown upside down; this is only done when the country is in significant distress.

2. The flag should be allowed to fly freely

When you hang a flag on a pole, it should only be fastened along the left side so the rest of the flag falls freely and flies freely when the wind blows. Old Glory should never be tied up, fastened, or otherwise held taught so that it cannot move gracefully with the breeze.

Remember: Just like freedom, the flag should be unrestricted when on display.

3. Take down the flag during inclement weather

Flags available today are often made with some pretty resilient materials. Therefore, most can withstand a little rain, snow, or sun exposure. Nevertheless, if you are anticipating severe weather or wind that could cause damage to the flag, the general rule is to take down the flag and store it properly.

Remember: The American flag is meant to be respected and protected, so removal before a storm is perceived as a sign of just that.

4. Illuminate the flag if displaying after dark

If you have an all-weather flag, you can leave it displayed at all times, dark or daylight. However, if flying Old Glory after dark, make sure it is properly illuminated with a floodlight or spotlight. It is considered in bad taste to have a flag out after dark that is not properly illuminated. If you are unable to illuminate the flag properly, it should be taken down every day at sunset.

Remember: The American flag should be visible at all times when on display.

5. Nothing goes above the American flag

Generally speaking, if you plan to display a flag in your yard with other flags, the American flag takes the position of honor, always. This means the U.S. flag should have the highest position in a group of flags, even if the flags are on the same pole.

If you are displaying a state flag, a flag from another country, and the American flag, for example, on multiple poles in your yard, Old Glory should be positioned in a way that it is taller than the rest.

The only situation in which the top-placement rule does not apply is if you have a gaff. If you have a gaff adjacent to the main pole, attach the American flag to it, and then use the top of the flagpole (masthead) for a personal flag of your own design called a “private signal.” This was traditionally used for naval signal flags, and some places use the private signal spot for something like a club pennant flag.

Remember: Unless you have a gaff, nothing goes above the American flag.

6. The flag should not touch anything

When the flag is on display on a flagpole, it should not touch anything. For example, the pole should be tall enough that the flag cannot touch the ground and far enough from structures, trees, and other implements that it won’t brush against anything as it flies. Likewise, the flag should be held from the ground during raising and lowering.

What is a yardarm? Yardarms, also called crosstrees, are on gaff-rigged flagpoles. Gaff-rigged flagpoles resemble what is used at sea by naval ships, and the yardarms allow for added halyards to attach other types of flags or signals.

Yardarms are used by many yacht clubs to fly the flags of officers at the club, but you can also use this for your own purposes.  You can use the yardarm’s halyards for fun signals: A martini flag means it’s sundowner cocktail hour, and a barbecue flag means it’s time to eat. A battle-ax flag could mean the mother-in-law is in residence—although flying that is at your own peril.

Remember: The rule is that the U.S. flag should be above any flag on the yardarm.

When a flag reaches a point where its condition is no longer fitting for representing the nation, the flag should be retired. Even flag retirement and disposal come along with a few caveats. The rules state that the flag should be destroyed in a “ceremonious and dignified” way, and burning the flag is the preference.

If you are uncomfortable with flag disposal yourself, reach out to your local American Legion Post. Most will handle retiring worn and ragged flags ceremoniously at certain times of the year. Likewise, some groups, such as the Boy Scouts of America, handle flag disposal as well.

Contrary to popular belief, a flag does not have to be destroyed if it touches the ground. The primary reason to avoid touching the ground is out of respect and to prevent the flag from getting dirty. If the flag still appears suitable and clean, it can be used. Washing or dry-cleaning the flag is even an acceptable practice if it does get soiled.

Rules for Flag Handling and Storage

When raising and lowering the flag, or taking it down for storage, it should be handled with care. Don’t allow the flag to touch the ground so it does not get soiled when you are removing it from the flagpole.

When the flag is taken down for storage, it should be folded properly and kept in a safe place. The proper way to fold a flag involves folding it lengthwise aligned with the stripes, and then folding in a triangle from one end until the full flag is in a triangle shape. You will have a small flap remaining that can be tucked into the fold for securing the fold.

When you are storing the flag, it should never be stored on the ground. Instead, the flag should be in a storage box, drawer, or safe place on a shelf. To protect the flag from sunlight, be sure to avoid storage in a window.

How To Install A Flagpole

Installation of a flagpole is straightforward, although you may need a crane for the final lift if you have a substantially tall pole. In general, you will:

Longer flagpoles may require a crane for erecting, but most standard poles can be erected by hand.

Where to Put a Flagpole in Your Yard

There really are no written rules about where you can place a flagpole on your property unless you have a governing HOA that dictates placement or other zoning restrictions to consider. The most important thing is to put the pole in an area where the flag can fly freely and won’t be at risk of touching anything as it does. ‘When picking the best spot, consider:

If possible, pick an area where the flag will get wind from multiple directions so it will wave in the wind regularly. Most people pick an area in a central part of their yard where the flag is at least partially open to the wind, gets ample natural light, and acts as a focal point of the property.

How to Dig a Hole for Your Flagpole

As far as digging the hole, the general rule is to dig a hole that is about 4 or 6 times as wide as the base diameter of the flagpole you plan to install. Your new flagpole should come with a ground sleeve, so the hole should be at least the length of that sleeve with a little added depth for drainage gravel.

Make sure whatever area you choose for your new flagpole is a safe spot for digging. You may have underground utility lines to consider, and you don’t want to disrupt those lines while digging for flagpole placement. To find out more about underground utilities, you can simply call 8-1-1 to have a technician come out and mark lines for you.